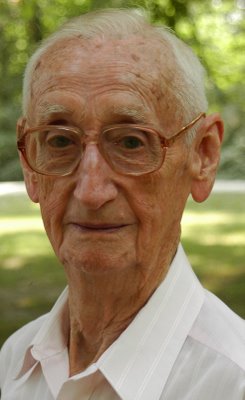 My Grandpa Gordon crossed to the other side at 2 o’clock this morning. Peacefully with family at his side. The last thing he did was laugh. That is what he did.

Grandpa influenced me in more ways that I can imagine. I just remember telling him many years ago that he was my best friend. He could take most situations and make a joke out of them. He was also one of the most patient people I have ever known. I do not remember him ever loosing his temper. If he did it was only for a second and gone.

I don’t know what else to write. I will miss him, but he has gone on and would want us to move on, too. He was 95. Member of Central Baptist Church for 80 years. Married to Grandma for 75 years. Father and friend forever.

Pengin wants to say goodbye, too.